This years Busted Knuckles Build-Off project has proven to be an exciting event as custom builds continue to capture the imagination of motorcyclists across the globe.

The stunning street fighter from the team at MotoMAX in Perth has been dubbed the winner of the Expert’s Choice Award in the 2019 Busted Knuckles Build-Off! Owner Ric Steele and his talented team pushed the limits to add a tonne of custom work, finishing touches and attention to detail to unveil ‘Royal Steel’ (so suitably named) to the world.

During the last two weeks of November, an online Facebook poll was conducted to give the public the chance to vote for their favourite custom build in the Busted Knuckles Build-Off. With six incredible (and worthy) custom Royal Enfield’s to choose between, the competition was tense. In the end, the ‘People’s Choice Award’ went to the team at Wanaka Powersports in New Zealand, for their ‘Intertracker’ – a 865cc big bore version of the Interceptor 650. 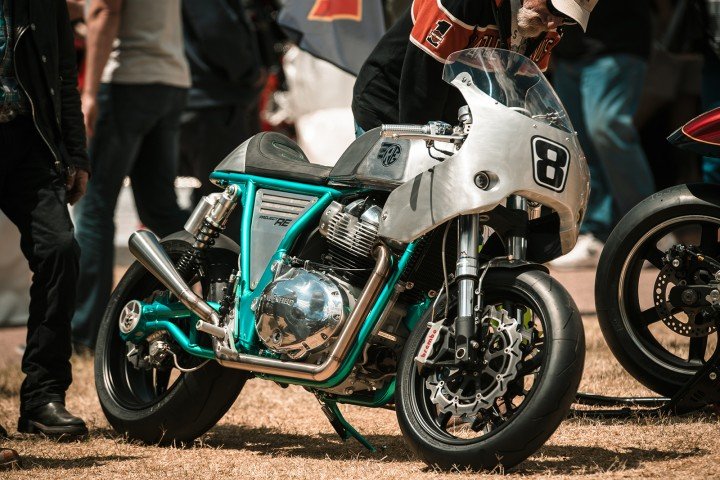 I’m often asked when or how I got into the motorcycle industry and my normal response is “forever, I was born into it!” My Dad, Mike Steele was lewered into the motorcycle trade in the 70’s after a modestly successful career in racing motorcycles. I was born in the 80’s, at that time Dad owned a Yamaha/Ducati dealership in New Zealand. So as you would expect i’m interested in all things that move, well not just move but move fast!

In 2003 I had been racing push bikes (cycling) and trying to make my way in Europe. After realizing that was a damn hard way to make a dollar, I returned to Perth and started repairing and selling Japanese motorcycles from a workshop at my Dad’s truck dealership. The following year we started MotoMAX. With my energy and interest focused on motorcycles, I was naturally drawn to racing, not so much production racing but real race bikes and for a number of years competing in the 250GP class. Although a dying class I loved that fact it was a pure racing class not just a street bike!

Fast forward to 2015 I had the opportunity to work with Royal Enfield and we have taken it with both hands. We are very proud of how we have grown with the brand in Perth. My love for the brand is its “pure motorcycling” much like my interest in GP racing, it’s the fact its not trying to be something it isn’t. It’s for the purest or someone that just enjoys riding, I often will tell an RE owner or potential owner’s it doesn’t matter what your into, if you enjoy riding then you will love experience of what it is to ride a Royal Enfield. Simple motorcycling that puts a grin on your face.

Anyway, the backstory maybe helps with the inspiration for the build. Hard to give you a clear answer as I like all styles of builds. I know what I like and more importantly what I don’t like. Like most custom builds I’ve used inspiration from many, but it was a conversation I had with the late Paul Ventura from Royal Enfield’s UK Tech Center in 2017 at the Sydney motorcycle show that sent me down this path. I loved his vision and was very excited with where he wanted the brand to go. So the motivations for the build are little of Paul’s words mix together with my interests in GP racing. I’m lucky to have some very talented fabricators available to me locally in Perth and although this is a MotoMAX build we are promoting the whole custom/classic bike scene in Perth.

I’m excited to see the end result and I think a lot of people the world over will be divided on what we have created, but what is for sure it’s guaranteed to create interest and conversation about Royal Enfield, MotoMAX & the Perth custom scene, that is what we have set out to do! 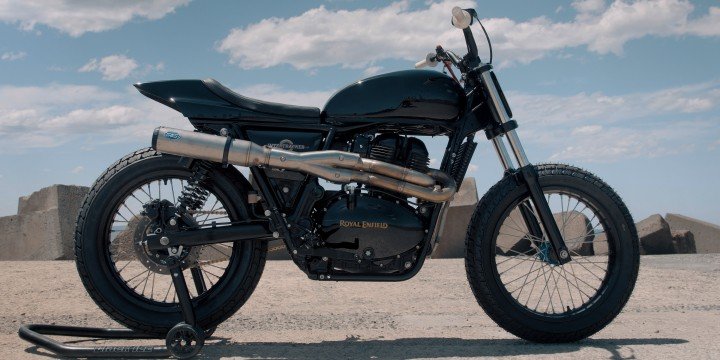 About the Custom Build

With my self and the rest of the crew at Wanaka Powersports coming from a dirt bike background, we decided that we would branch away from what is becoming the norm with 650 twin builds and try do something that is different and relates to our shop, and the style of bike we love. Another reason we went with a flat tracker build, is to show people how versatile the new 650 twin platform is. With the rapid growth and booming popularity of flat track racing in America, we thought a build like this would help Royal Enfield become even more popular in the US market. Being located in Wanaka, New Zealand, made it hard to get custom parts from the companies we worked with in time to get the build finished. Without the amazing people at S&S Cycles, Sevenee distrobution, K Tech Suspension NZ, Rodz and Restos and many more, all this could not have happened.

Shoutout to our NZ crew! Royal Enfield NZ will be

Fireball or Supernova? 🔥 #CruiseEasy through t

If you're in Newcastle on the 11th July, make sure